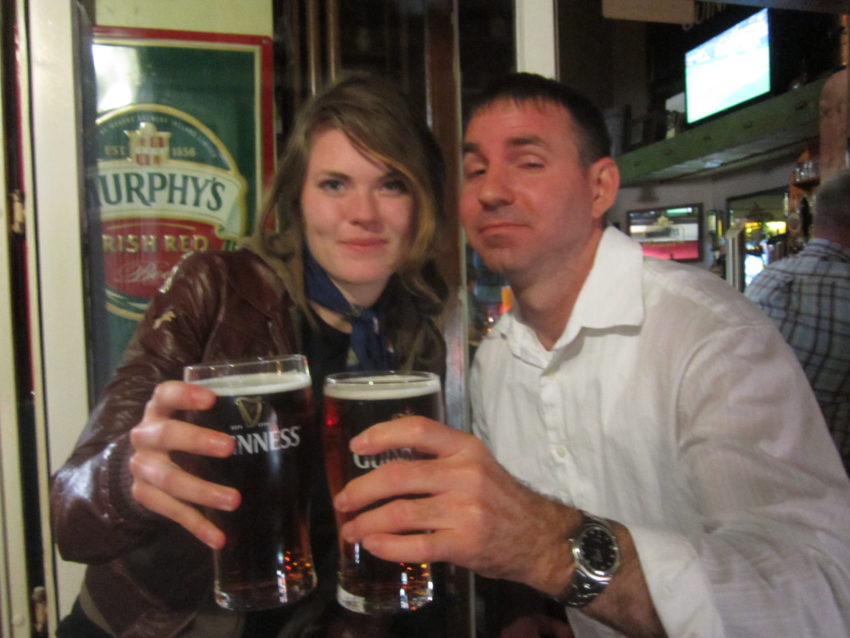 Train to Frankfurt, Germany
Around 10:30, an announcement came over the speaker, saying the platform number of where to be for the train. We walked to the platform, waited, then got on the train. The first train was a small number of cars, new and modern, like a monorail at Disney World. We took that train for about 10 minutes, got off at the next stop, then walked to the next platformm, got on the next train and rode that for about an hour. There was another stop where got off, then got on a train, the final train to Frankfurt, that was so crowded we found a seat for Raegan, while I stood in the middle section until the next stop, where someone got off in the seat in front of her.

I asked the guy sitting in front if he would mind switching seats with Raegan so “I could sit beside my girlfriend”.

Raegan was embarrassed that I asked him to switch seats, but I think she was glad to sit beside me.

We rode the train to Frankfurt.

Frankfurt, Germany
Once we got to Frankfurt, we called Ryan and he told us he would meet us at “O’Rilley’s” an Irish pub across the street from the train station.

We went there, Raegan ordered a beer, and we watched the conversation between a young man and an older man in the table in front of us.

The young guy was tanned, blond haired, blue eyes, white teeth, good looking, almost like Brad Pitt with an easy eager grin and happy eyes. The guy to the right was short, tanned and wrinkled, with beady eyes and a small upturned nose, skinny, petite, with expressive eyes, looking like a marionette puppet.

We agree to do this.

Then, Raegan told me that their conversation was funny.

She said the older guy was saying something in another language and the younger guy was answering with “I don’t know what you’re saying”.

She said that, at one point, the older guy says something and the younger guy replies “escort service? No, I think you’re getting the wrong idea.”

We both laughed at this. We both were watching there exchange.

The older guy was asking the young guy for cigarettes and he was offering them to him, while trying to talk to him. He offers him cigarettes.

Then, the older guy pulls a beer bottle from a bag, opens it, and is about to pour it into a glass when a dark haired waiter notices and tells him he can’t do this.

The older guy protests, then shakes the hands of the younger guy, the waiter, and leaves, but asks for more cigarettes first. He asks for cigarettes from Raegan, who offers him one, then he walks off.

The waiter explains that he’s “the local crazy”.

I introduce myself to the younger guy and we get into a conversation with him. His
name is Olly, Oliver, and he’s been traveling in Asia for 8 months and is now on his way back Finland, where he lives. He’s nice and friendly and tells us stories about traveling, meeting people, this Canadian girl, and how he likes traveling to have fun, even if it means sticking with other travelers instead of trying to be only with the locals. He invites us to stay with him in Finland and we get his e-mail.

Ryan parks his red Ford F-150 pickup truck and we load our gear in and leave. Ryan was quiet at first so I didn’t no what to expect. It turns out Raegan was apprehensive about this too as she mentioned it later when I brought it up. Weisbaden, Germany
However, after Ryan drove us to the base where we brought our backpacks to his room, then drove us to the forest at the mountain top where there was an Ewok village type setup where people could wander from trees to trees, about 30 or 40 feet up, with rapelling wires strapped to them, in a kind of up in the air athletic course that you paid for as it was really unique, then taking us to dinner at an Italian restaurant on base that, was suprisingly delicious, with free shots that followed by the bartender, Erko, from Romania, then giving us a walking tour of Weisbaden at night with all of it’s beauty, quaint charm and historic architecture, we knew that Ryan was a great host. It just took some warming up.

Tuesday
Raegan is clothed, lying under the covers, in bed. I’m beside here, crouched down with the laptop open, typing this.

Ryan is in bed, taking an online test. The flat screen TV in front of him is broadcasting a wrestling match. We’re in the 4th floor, in Ryan’s room, in base in Weisbaden, Germany. It stopped raining and I mentioned this to Raegan. Ryan said he’ll be finished in a little while.

Yesterday, he said we could go to Meinz, a town in Germany. I’m supposing we’ll explore this town and other places that Ryan wants to show us and get some food to snack on and probably eat lunch, too.

Now, we’re at Ryan’s room, fourth floor walkup, where we’ll be until Friday, when
we hitchhike to our next WWOOF farm. Wednesday
Ryan drove us to a grocery store and Raegan and I purchased green grapes, bananas, ruffles potato chips, tortilla chips, salsa, pecan sandies, and 3 of those michellina microwave pasta meals. We returned to Ryan’s room, ate lunch, then ventured out again.

Ryan drove us to Meinz, a town in Germany, where he parked and we walked around. He showed us the town and pointed out bars and restaurants that he had either been to or heard about. It was like being given a private tour. Toward the end of the day, we went to a restaurant/bar in downtown Wiesbaden, got a table. Ryan and Raegan ordered beers. I ordered water. Christopher arrived, this friend of Ryan’s who Ryan met at church. He was an intense 26 year old, with eyes that would squint intently when listening to you.

He explained that he was a mason. He was into politics, online stock trading, and
works as a lawyer. He’s applying to be a lawyer at the American consulate.

He wants help with a website, making money with affiliate programs.

I offered to help him. He offered to show me how to make money with currency trading and I said I’m interested. He also explained that he could set up an offshore banking account for me, one that required no minimum balance for checking or saving, one that the government would be unable to keep tabs on. It sounded good. I told him that I would definitely contact him. After hanging out, listening, talking at the table with Ryan, Raegan, and Christopher, we left.

Now, Raegan is laying on Ryan’s bed, watching a video on her computer, while I sit here, typing this. Ryan is working the next few days. We’re planning to leave Friday or Saturday to the next WWOOF stop, probably Saturday, since Ryan could give us a ride to the train station or to an area near the on ramp for hitchhiking.

Friday
I woke early and typed up a lengthy blog titled “How to be Free”. The blog was inspired by what I read at the website http://www.buildfreedom.com, about how to install new belief systems that are effective for finding freedom in life. Essentially, I wrote about 3 things you can do to be free. I did around 100 pushups, drank water, and wrote. Ryan had left to work early. Raegan slept in.

A few hours later, Raegan gets up, and we talked. Then, she laid in the bed with
her laptop open, online. I bought a double order of french fries from the German who runs the lunchcart in front of the video store, along with a coca cola in a can.

The fries were delicious and eating them, since I had finished typing the long blog and posted it at http://www.kriskemp.com, was rewarding.