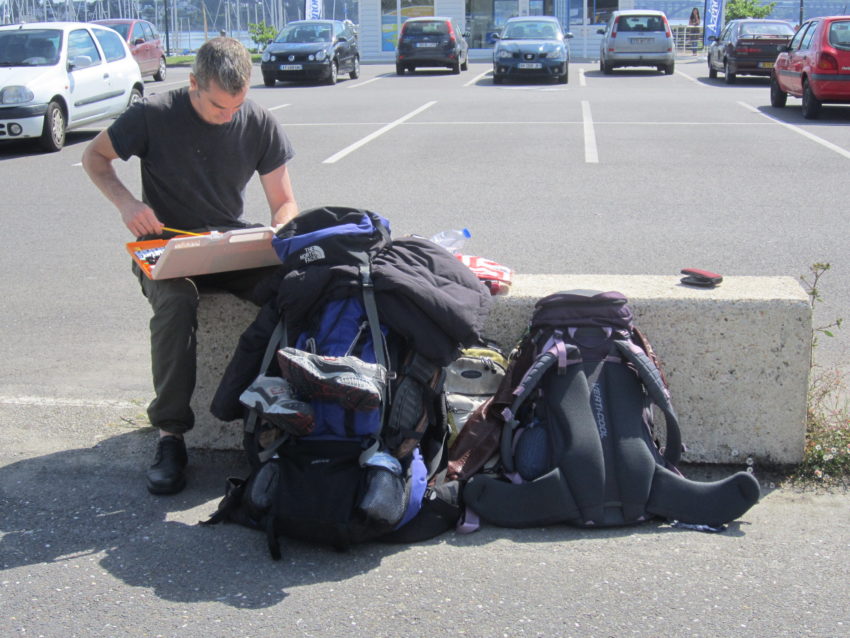 I was thinking about this as we walked into the parking lot of Oceanopolis.

The parking lot is massive. No shaded areas nearby. It’s extremely hot, bright, sunny outside and we’re sitting on a concrete block, in a sea of asphalt, being cooked like two bugs under a magnifying glass.

I’m imagining that he’ll be tanned, with a salt-and-pepper colored beard, wearing a wide brimmed, weatherbeaten hat, driving a wreck of a car, something rusted, with a good engine.

I decide to call Yannick. I walk to the Oceanopolis entrance and ask the person at the front desk, sitting behind the plexiglass ticket counter, if I can use a phone.

I turn and walk back toward her. She’s loading her backpack into the hatchback of a small car.

This guy didn’t look anything like I expected him to look.

He’s tall, slim, and wears thick glasses. He looks like a high school science teacher. In the passenger side of the front seat sits Marie, his fiance. She’s friendly and laconic. Their children sit in the back–Natan, a two year old, and a younger child, whose name I promptly forget.

Within seconds, we’re back on the freeway heading through the rolling hills of countryside that rush by all around us. Yannick drives the tiny car like a race car driver.

“This is my first time hosting wwoofers,” he starts. “I wwoofed before in New Zealand and Australia. I know how it’s like to wwoof. So, I’ll treat you well.”

He steers the car into a massive parking lot and finds a parking spot near a massive building. It’s Ikea. I’ve never been to this place before. As we approach the building, we get smaller and smaller in size. By the time we enter the building, we’re the size of ants, being swallowed up the giant anteater known as Ikea that sucks up every stray homeowner with the promise of seductive kitchenware and household furnishings.

Inside, the place is massive and immaculately clean. Hundreds of people strolled around hypnotized by the shiny utensils. Seeing the couples holding hands and hearing the French-spoken conversation that sat above them like cloud only added to the sexy shopping atmosphere. Bedding, anyone?

Yannik and Marie browsed the store. Raegan and I followed along. We take the escalator to the cafeteria and choose from the buffet. Yannik pays for it. Cool and generous of him.

I get a multigrain crepe, french fries, and a beverage. Raegan gets a small vegetarian sandwich and a coffee. The food is delicious.

After lunch, we leave Ikea and load into the car.

As Yannik is driving, I look out the window and I’m struck by how beautiful and big France is, how bright and clear the sky is, the sky that seems to stretch on forever beyond the rolling countryside. Watching the world from the car, I was enchanted by everything. I felt like a little kid, going on a vacation to Disney World.

After an hour-or-so of driving, the countryside gives way to small towns and villages.

Yannick steers into a small village and parks at the town center.

A big, old Catholic church, a 500 year old building, he tells us. As it towers over the nearby shops, the church seems to watch over the entire village. Later, I find out that most small French towns that reside outside of villages in the countryside, are laid out like a bicycle wheel wherein the church is the center spoke and nearby smaller stores and shops are spread out toward the edge.

Even in its quietness, the church is majestic and impressive.

After some picture-taking, we pile into the the car. He fires up the engine and we head down the winding roads to the small village of Loqueffret. The town comes into view and then suddenly we’re in it–a small town with narrow, hilly streets, two-to-three-story stone houses, and rolling pasture land, meadows, and forests. Yannik’s house sits on the main street, a narrow, two-lane road that runs right through the center of town. He opens the front door and leads us upstairs. A hatch at the top of the stairs opens to the the floor of an attic room. It’s a beautiful space with wood floors, two beds, and windows that run alongside the roof that overlook the street and the surrounding countryside.

The first day at Yannicks Raegan goes grocery shopping with Marie, while I ride the tractor with Yannik. He shows me the gears and lets me drive it for a while, as we mow a small patch of pasture.

Yannik runs a 200 acre cattle farm. The 200 acres are divided into smaller land lots that are crisscrossed by 2-lane roads that wind through the countryside.

He raises cows for butchering. He’s in the 2-year process of converting his farm to organic. Along with selling the beef from farming, he also earns money from the parks and recreation department for keeping up his property, which boarders their property.

Working on the farm
Our daily work tasks consist of mending fence, by putting up new fencing, removing old fencing, weed wacking (using a weed wacker with an engine that gets strapped on like a backpack), and helping Yannick to herd cows.

For the first few days, he showed us what to do. Then, he would tell us what to do, and leave us to do it while he did something else. We were usually working for 6 hours a day, 5 days a week. Sometimes, Raegan and I would work together, pulling up pigtails (fence posts) and wiring. At other times, we would work on our own.

Around noon, Yannick would pick us up for lunch, then drive us back to his house for a delicious meal prepared by Marie, his fiance’.

The day would usually start around 8am or 8:30am with breakfast, then a short break, after which Yannik would drive us in his jeep to his barn, a few miles away. The barn held his tractor, a tool shed, and a few areas partitioned for the cattle. The barn is centrally located within his pasture.

Around 1pm, Yannick would collect us in his Jeep and drive us back to his house for lunch, which would last 2 hours (1 hour for eating, 1 hour for a nap or to relax)|. Then, it was off to work again until evening, when we would return, get cleaned up, then be called for dinner, usually around 8pm.

At dinner, we were offered copious amounts of delicious red wine and Ricard, an alcoholic drink that tastes like black licorice, that requires the addition of water as it is strong.

After dinner, even after lunch sometimes, we would be served dessert. Since Marie, his fiance, was a culinary school graduate, from the world famous Cordon Bleu in Paris, France, specializing in pastries and desserts, the food, especially the desserts, were delicious. Her “strawberry creme fresh” was the best dessert I had ever tasted. Something about the fresh ingredients and the cream

On the second day at Yannick’s farm, he drove us in his Jeep to the farm, and told us to roam the grounds, that he had an errand to do. Raegan and I get out, walk around the pasture, and play with his dog, an excitable boarder collie, a cattle herding dog he’d gotten from a local farmer. The dog has one brown eye and one aqua blue eye and, when nearing a group of cows, will crouch, and slow his gait to a deliberate stealth approach. While Yannick is gone, Raegan and I walk the 1-2 acre patch of land, avoiding the flattened piles of cow excrement. We visit the trailer on the other side, which contains 2 bedrooms, 2 bathrooms, living room, kitchen. I turn on the water but none comes out. We stroll the nearby garden with its lettuce, radishes, carrots, then walk to the other side of the pasture, ducking beneath the electric wire and crossing the meadow until we reach the forest, where the land slopes to a swampy area at the bottom. After about 90 minutes, Yannik returns. We get in the Jeep. He drives us home. Delicious food
We go to our upstairs room and get on the internet, our laptops open, until we’re called for lunch, sauteed tuna with marinara sauce and onions over farafel pasta and a loaf of baguette with a brick of farm fresh butter. The dessert was soft cheese, which tastes like yogurt but 1000 times better since it contains the butterfat of the milk, with fresh pureed strawberries on top. It was served in a little glass jar that looked like a jam jar. The meal was phenomenal.

Marie is an amazing cook.

One day on the farm, we got to herd cows, which was a really neat experience.

Yannick led us up the side of a hill, which had high grass with uneven terrain. He got in one place and instructed Raegan to stand about 20 yards away from him, and instructed me to stand 20 yards on the opposite side of him. Herding cows in France
I’m standing there, holding out the sticks, looking at Raegan, the cows, Yannick, and thinking: This is awesome. I’m in France, in Loqueffret, France, standing on the side of a hill, herding cows. It was windy and slightly cold. Still, it was awesome, especially when the cows started running and we’re chasing after them, falling into the uneven terrain that goes up and down 6 to 12 inches with every step you take. Chasing cows, in France = exhilarating.

On weekends, we wouldn’t have to work, unless an unforseen circumstance came up, like cows escaping the pasture. So, on Saturdays and Sundays, if Yannick and Marie were not showing us another village, we would walk around Loqueffret, France, to explore and take pictures. Yannick was a terrific host. He taught us the daily activities involved in running a farm. He introduced us to the pleasures of hard work and earned leisure. And his fiance’s food was almost indescribably delicious–it was that good. I felt a bit sad to leave Yannick’s place. I was just getting used to the routine. But, two weeks passed and our time there had come to end. The only thing I knew about the next place we were WWOOF’ing is this: they are a young couple with two children. The husband, Aman, is a comedienne.