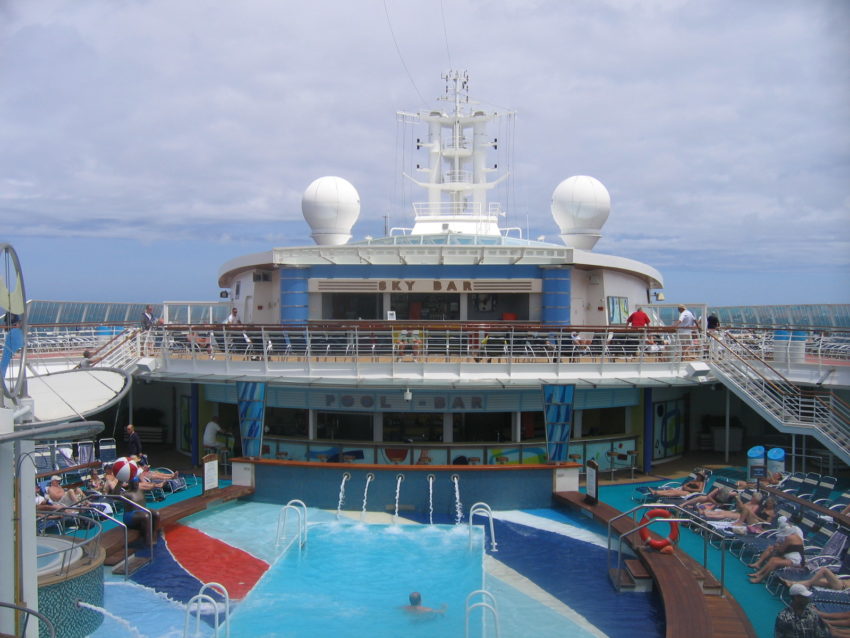 As I had never been on a cruise ship before, I had no idea what to expect.

I was surprised when I found out …

The ship had a rock climbing wall.

On the top deck.

The ship experiences was … 1. It was a 12-day cruise, leaving the Port of Fort Lauderdale, Florida, stopping in the Azores Delgado (Portugal island) after 7 days, for a one day stop, then continuing, arriving in Brest, France on the 10th day, Cherbourg, France, on the 11th day, and Harwich, England on the 12th day.

2. All food, except for alcoholic beverages, was included. Most of the restaurants featured all you can eat buffets and they were open most of the time. 3. The ship included a rock climbing wall, dance lessons, a movie theatre, a performance stage with live theatre and guest speakers, various speakers on different topics who gave lectures in the Safari Room (a section of the ship), singers and musicians, delicious food, friendly staff, and daily cleaning and room services. 4. There was a lot of activities on the ship, movies, dance lessons, rock climbing wall, an indoor swimming pool, an outdoor swimming pool, a jacuzzi, a jogging and walking track, a gym, a theatre that featured musical theatre, dancing, a magician, a professional pickpocket who know lectures about how to protect yourself from being a victim of pickpockets, and more. 5. A variety of classes, lectures, even church services. We attended a lecture about “The Science behind C.S.I.” in which a former forensic investigator explained the realities and misconceptions about the popular TV show. We also attended church, a Catholic church service on Sunday mornings. Besides the children of the young family, who were taking the cruise with us, we appeared to be the youngest people on the ship.  Most of the people appeared to be retired people, mostly couples, and some groups of singles.

Once we were on the cruise ship, I was expecting to spend time with the family that, initially, I had planned to accompany. The family was getting off at the same port (Brest, France) that we were. Because of the similar itinerary, I assumed we’d be spending a lot of time with them on the ship, which would give them (the family) a chance to access us, to see if they wanted to invite us along with them, an extra help for their children, and for the company.

But, that didn’t happen.

I suppose the family was busy doing their own thing.  I didn’t take it personally.

Perhaps you’re wondering what my deal is–traveling to Europe with a girl-I’ve-just-met. It was something else …