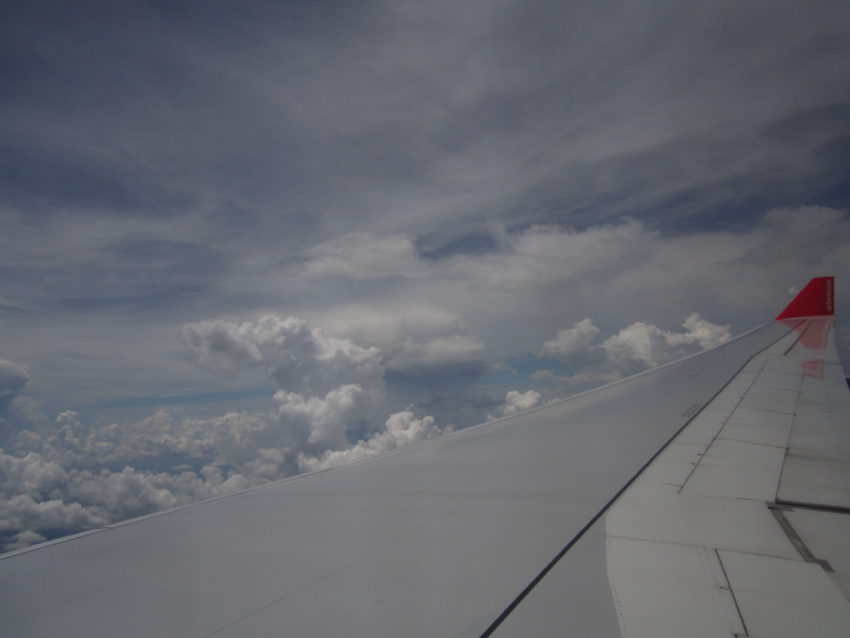 This night was a tiresome, arduous journey of riding the train, 6 hours, with about 5 different connections inbetween, from Prenzlau to the Hamburg train station.

Some of the rides were about an hour long. Others were only a half hour or less. So, once we got to a station, we’d throw our backpacks on, grab the remaining gear–sleeping bag and smaller pack–and walk as fast as possible, looking for the next train to the next destination.

At midnight, we ended up at the Hamburg train station, a massive train station, densely crowded with weekend partygoers. Most of them appeared to be twenty somethings, the guys dressed in jeans and t-shirts and the glammed up in short dresses or shorts and dolled up with makeup. The Hamburg train station is cavernous, littered with restaurants and cafes and the noise from all the partygoers. It was loud, crowded, and insane. It was kind of stressful, too, since Raegan and I, following the signs that pointed to information, found the information station closed.

We ended up on a train that was so crowded, we kept our backpacks on. Then,

Raegan said: “I don’t think this is the right train.”

She was looking at the train route map near the ceiling and hearing her say that left me with a sinking feeling. It was hot with all the people standing shoulder to shoulder within the train car.

My pack bumped into someone sitting down. I looked at the guy and said “sorry” and he looked at me sternly and then I looked at him and raised my shoulders like “what the fuck, dude? it’s not like i can move” until he looked away. He has no right to expect not to be bumped in a train this crowded. The train was sardine packed with humans looking for fun, love, and other ways to get lost in the wee hours of a Saturday night as it crosses into Sunday morning.

Sunday
As people got off at the next step, Raegan found a seat, then said “sit here” as she pulled one down next to her, so I did, leaving the backpack on.

A blonde haired girl with an Irish accent overheard Raegan and I talking about how to get to the bus station. She told us where to go. It’s nice to get help from someone who is a complete stranger. She got off at the next stop. We thanked here and she walked away, waving, with a kind smile.

A twenty something kid nearby, behind the couple across from us–who looked to be in their forties, both wearing jeans and white collar shirts, as if they were retired models from a Gap ad in the eighties–asked us if we knew where we were going.

“We’re looking for the train station.” I told him.

He told us where to go, then offered to walk us there. We thanked him.

At the bus stop, he and his girlfriend, a short blonde wearing tight jeans and keds, who was laconic, directed us where to go, walking us to the bus stop. We thanked them and they walked away.

Across the street, I saw some bushes, told Raegan “I have to go the bathroom, I’ll
be back” and then walked across the street, found a space in the bushes, peed. When I returned, I saw Raegan talking to a guy and a girl.

Raegan was rolling a cigarette.

He said he was from the Czech Republic and living in Hamburg, but hoped to go the United States to do computer work. With his white T-shirt with wings or skulls on it in black ink, silver necklace, denim, he looked like a 90’s metal fan, but this outfit seems common to guys in Germany. After some talk, they leave.

The bus rolls up and stops nearby. The driver and someone else inside are taking a
break, eating something. A few minutes later, the bus pulls up. We get on. I pay
$2.60. We walk to the back of the bus, set our gear down, and watch the outside
world of Hamburg pass by for the next few minutes until we arrive at the Hamburg airport.

The Hamburg airport lobby greets us with these enormously high ceilings, like a
warehouse space, probably 40 feet in the air, that opens to the second floor balcony. We join the ranks of other weary travelers who have parked their tired bodies on the seats, while waiting for their departing flights. The stairways to the second floor are blocked by these poles, I’m guessing, for the next few hours, maybe for the cleaning crew or for security purposes or whatever.

We get online. Raegan pays for 3 hours of internet time. Then, she sees a nearby cafe, goes there, orders a beer, a Hefenvizen, while being online for a bit. We talk.

She orders another Hefenvizen. We talk some more, while I keep looking over at our gear sitting on the nearby chairs in the waiting area. We both use the bathroom multiple times.

A few hours later, maybe around 2pm, we return to the seats. Raegan curls up, her beautiful head on my lap, sleeping under the pink fleece blanket, while I sit there for two hours, staying still, so she can sleep.

Later, around 8am, we check our bags, then board the first flight headed to Dusseldorf. As the flight takes off, a girl across from us, starts crying loudly, and this freaks me out, as I’m afraid to fly, and I kind of start crying. She’s curled up in her boyfriend’s arms. The flight’s only 45 minutes long. Once we disboard the plane, we search for the next flight, then find it, board it. This flight is on a big plane with 3 aisles. Raegan has the window seat and I’m sitting beside her. Air Berlin flight
To return to America, we booked a flight with Air Berlin, out of Hamburg, Germany to Miami, Florida. The 9 hour and 51 minute flight was smooth. The stewards and stewardesses were polite. They served a delicious hot meal, a snack, and drinks, your choice of water, white wine, red wine, soda, juice. There was even an in flight movie, “Midnight in Paris” that you could watch free. Listening to the movie required headphones, a few euros each. 10am
The plane flight is smooth, with very little bumpy spots, but I’m still uncomfortable for most of the whole flight, since we’re 38,000 feet in the air and I have these visions that keep coming to my mind, visions of another plane running into us, then us plummeting to the ground, then me standing before the Judgment Seat of God, while the weight of eternity hangs in the balance, of a final destination in either Heaven or Hell, and I’m afraid that my “persistence in doing good to seek glory, honor, immortality” has not resulted in my going to Heaven. The bottom line is this: I’m afraid of flying because I’m afraid that, if, something happens, everyone on board is doomed and we’re all going to die and I’m not sure, since I now believe that Salvation requires maintenance and that there must be a persistence in doing good, if I’ll make it to Heaven. With trains or cars or even hitchhiking, I feel that there are multiple ways of escape. With a plane, however, because it’s so high in the air, if something goes wrong, it could be all over. Also, it feels unnatural to me, even in a plane, having 38,000 feet of air under my feet.

Thankfully, we arrive safely, landing in Miami, Florida, and there’s applause, by
others first, then we join in, as we land. The plane ride was really good, actually, as it was smooth for most of the entire way. Also, we were served 2 meals, along with a snack of cookies, and servings of our choice of coffee, tea, water, apple juice, orange juice, tomato juice, white wine, red wine.

On the plane, I took 3 or 4 sleeping pills and they didn’t appear to work, although, at one point, I was slurring my speech, was moving my arms really slowly which is uncharacteristic for me, and Raegan pointed out that my eyes were red and puffy, as if I was drugged. I was drugged, self medicated on sleeping pills that my body or my mind or both chose to override, ignore.

So, even though we leave Hamburg, Germany at 10am, and it’s a 10 hour flight, we
arrive in Miami, Florida at 2pm on the same day, due to the time difference, being
6 hours behind, between Florida and Germany.

After going through multiple lines for customs, we find Margaret, Raegan’s Mom,
walking toward us, flailing her arms up and down, a big bright smile on her face,
her blonde maine sticking up like the Lion King has just awakened, walking toward us. Nearby is Rocky, Raegan’s Dad, and it’s great to see them, as they grab our bags and we find their truck.

They drive back to their 9th floor condo. On the way there, I call Mom and tell her I’ll be with them tonight.

Then, we arrive at the condo. Rocky serves us delicious French onion soup he’s been making all day, left simmering while he and Margaret went to pick us up in Miami, along with delicious veggie burgers for Raegan and I. After dinner, we watch “The Forgotten”, some of it, then go to sleep.