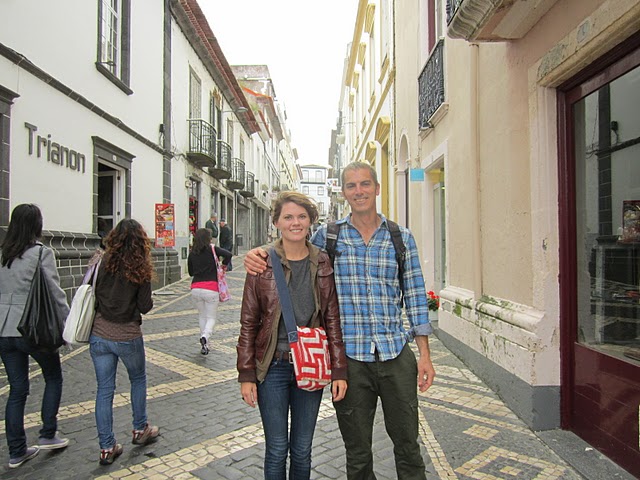 As the ship maneuvered its way into the port, there was a growing sense of excitement among the passengers around us. We gathered on the top deck and watched as the mountainous island archipelago–the Azores islands of Portugal–rise up before our eyes. Outside, the weather was overcast and cold.

That didn’t stop us. Excitedly, we exited the ship. We explored the stone fort that buttresses the Atlantic Ocean.  We walked the cobblestone streets.  Got some espresso at a coffeeshop.  Took photos. On the way back to the ship, Raegan wanted some wine.

There was a nearby sandwich-shop, walkup-counter-type restaurant place that sold wine.  I bought a bottle and we sat at a table near the water.  We drank it.  I got pretty drunk.

It was soon after that the young family, the husband, came walking by with one of his children.  “Yeah,” I said, pointing to the wine.  “Sorry, I don’t want to be a bad influence to your kids.”

Even though it was cold and overcast, there were some kids, probably teenagers, swimming in the water near the dock.  I stripped down to my underwear and joined them. I was pretty drunk at this point, so I only went into the water to my shoulders, then dipped underneath and came up. To be honest, I’m not into drinking.

And drinking wine, good wine, when you’re immersed into an experience like this, a new experience, with a beautiful girl who’s laconic tendencies allow you to fill in the blanks with the hyperbole of your own imagination, being outside the United States, where you are a stranger … unencumbered by past circumstance or current status … In a way, alcohol puts a magnifying glass on ones personality, bringing clarity to things, rubbing the jaded corners from reality, allowing the person to move through experience in a way that’s somewhat childlike, with ego left on the floor.

I have this theory about drinking: it removes the ego. It leaves us childlike, irresponsible, reckless.

I emerged from the water shaking.

“Your lips are blue,” Raegan said.

“What are you gonna do with the wine?”  She asked.

I toweled off, took a few deep swigs from the bottle, offered her some, then placed it ever so gently in my backpack.

By the time we boarded the ship …