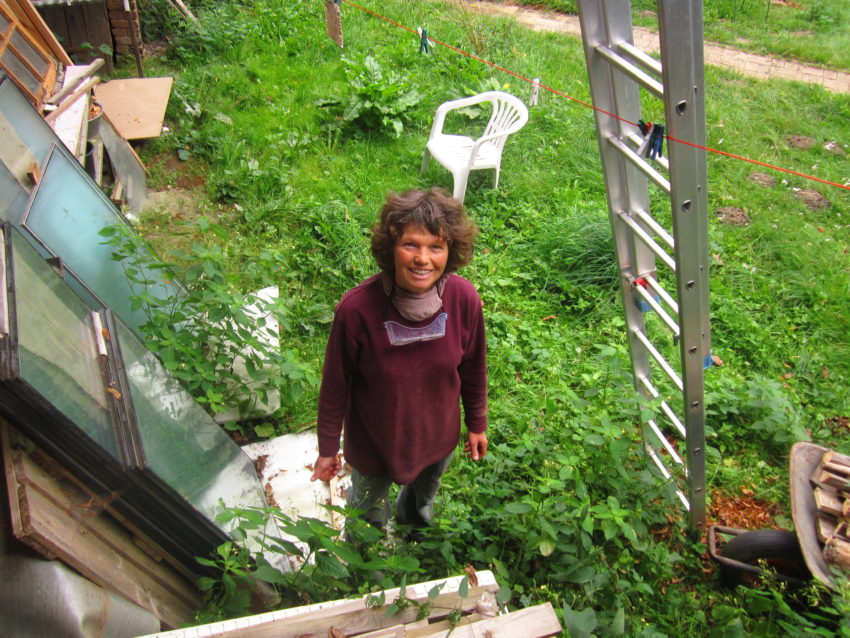 Sterhnagen, Germany
Tuesday
Julianne, the woman who runs the farm where we’re currently WWOOFing, is a hard working lady who keeps cows, horses, a donkey, and 2 llamas. Because she has a farm, she receives a discount on taxes that go toward health insurance. She said her boyfriend, Frank, a website developer, pays about $300 a month. She pays about $60 or $70 a month. Raegan, chopping wood, in Sternhagen, Germany. Travel like we did. Visit How to Travel Europe Cheap to get started.

So far, the work that we’ve done includes: milking cows, chopping wood, chopping plants in the horse pasture that are bad for the horses, then carrying the plants and dropping them in a pile by the river.

For money, Julianne gives piano lessons. Also, she barters her milk for other food she needs, like apple ginger juice, and also for this kind of currency that is used among farmers to buy and sell products and merchandise between themselves. The food here is mainly milk based–yogurt, milk, butter, cheese–or apple based– apple compote, apple juice, apples–with other foods like bread, and also yogurt with fruit and granola, coffee, tea, carrot and onion soup with pasta in a tomato-milk sauce that tastes like penne ala vodka. The food is delicious. Saturday
Earlier today, after a breakfast that consisted of our choice of boiled eggs, whole grain bread, fresh jams–plum, banana-orange-rhubarb, fresh butter, fresh milk, fresh cream, a pot of coffee, a pot of tea, sugar, a bowl of chopped lettuce–with Julianne Damminger, the lady who we’re WWOOFing with, and her boyfriend, Frank, Julianne left to run an errand and Frank left to go to work.

Raegan and I scooped up the poop from the donkey, the horse, and the llamas that was mixed in with wet hay that laid in the stable. We wheelbarrowed it to the back, dumped it in a pile, and replaced it with dry hay.

Now, Raegan and I are in the loft. We’re about to go outside to see what Julianne wants next. We’re probably going to put the tarp over the hay to keep it dry. The yoga instructor, that we met two days ago, who lives down the road, invited us to make apple cider today, so we’re probably going to do that afterward. This evening, around 5pm, we’re going to go to Prenzlau, to the train station, take a train to Hamburg, then another one to the airport, spend the night in the airport, then take a flight to Dusseldorf, Germany, then another flight from Dusseldorf to Miami, Florida, where Raegan’s Mom will pick us up.