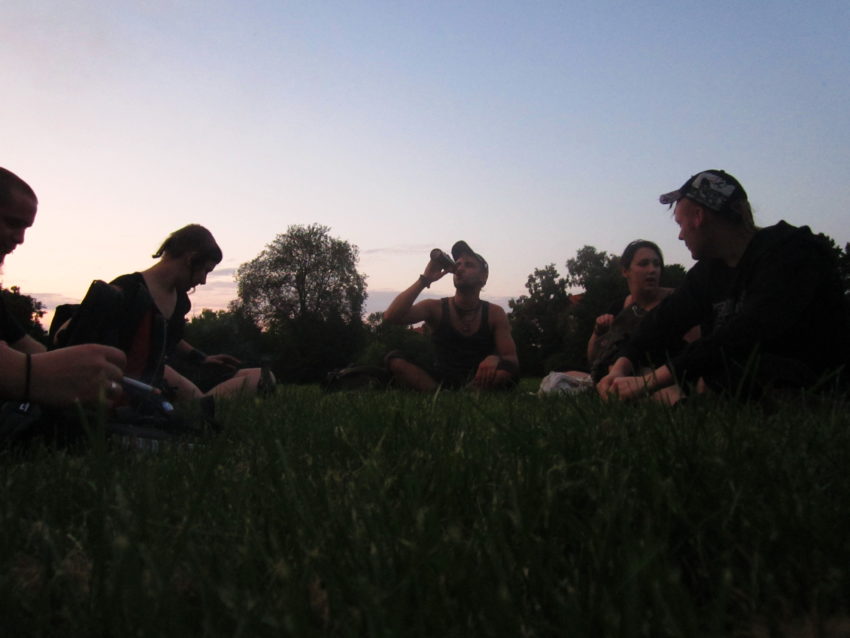 Monday
Currently, in Berlin, Germany, staying at a punk house, first floor, with high ceilings. Ben, the kid who’s the boyfriend of Janine, who we got the train ride with to Berlin, said we can stay here as long as we like. He’s letting us stay in his roommates room, who is out of town for 2 weeks. He called him and asked, then told us we could stay here. Either Janine or him, Ben, asked where we were staying and I said we’re looking for a place to stay Monday and Tuesday. Ben and Janine invited us to stay with them at a punk house in Berlin, Germany. We had our own room, in the room of a drummer who was out of town for a few days. Nice couple.

That was nice of him to call his roommate, ask him, let us stay here, and then offer us an extended invitation to stay as long as we like. Awesome. Thank God.

Tatiana and her girlfriend, and Janine, the friend of Ben, invited Raegan and I to an electro concert tonight at a bar, so we’re going there later. They said it’s a small bar. Sounds interesting. Later, some of Ben’s punk friends arrived to his apartment. We hung out in Ben’s room and talked. It was Ben, his friend, whose name I forget, Raegan, and me. They were drinking beers. I had some of Raegan’s beer and was drinking water.

Ben’s friend had a little dog with him, that sat on his lap. The conversation was centered around politics and living independent from the state. The dog owner went so far as to say he didn’t like Germany, the state. After more of Ben’s friends arrived, we walked to a nearby park, drank more beer, and talked and listened to music. Later, we went to a punk bar, drank shots of Mexikana, talked, laughed, stacked the paper coasters for beer into buildings and pretended they were cards.

Outside, the rain has subsided.

Later this evening, around 7pm, we’re going to our next couchsurfing location, in Berlin, Germany.

Around 6pm, we start to pack our gear, then walk out with Ben and Janine, the two friends who we stayed with at the punk house. It’s Ben’s living space and Janine is a friend. They are both very nice. We walked to the subway. Janine purchased a ticket for us, since I gave her money for a ticket yesterday that we did not use, then waved goodbye to them as we sat on the subway train, before the train’s outside view turned into a blur as it sped away.

Raegan is skilled with directions. We get off at the right exit, then follow his directions, which I had written onto a sheet of paper, until we find his house. We ring the bell. He buzzes us in.

This would be our second couchsurf location in Berlin. The first, at Ben’s, was incidental and a blessing, as we had not planned it, but rather told him we had no place to stay, and the kind fellow that he is, he calls his roommate who happens to be out of town and asks him if we can stay there. It was really nice of him to do that.

We open the door, walk through a hallway, open another door that leads to a courtyard. There’s a building on the right. “He said it’s on the right,” Raegan says.

We enter the building and walk up the stairs.

At the third floor, we knock on the door, it opens and we’re greeted by Jonny, who will be our couchsurfing host for the next two days, through Thursday evening. The view from the third-floor window, to a courtyard and patio area of a restaurant.

He’s a short, petite, balding man, probably late 20’s or early 30’s, and he greets us shyly, with a smile and keen eyes that seem curious and insecure, as if they’re dropping question marks all over the floor, to statements he refuses to ask. From the first introduction, the entire vibe is weird.

Raegan and I lumber inside the small apartment, through the front door, that leads to a tiny kitchen, and into a living room, with a futon. Beyond the living room is his room. We unstrap our backpacks and gently drop them to the floor, beside the chair that is opposite the futon. Then, we sit on the futon and make small talk with Jonny, this quiet and nervous fellow, who’s insecurities seem so great that they balloon around us, leaving little room to breath. I can already tell and I’m sure Raegan can, too, that this couchsurfing experience is going to be somewhat uncomfortable, because the host seems so uncomfortable with himself.

When I ask Jonny a question, he answers with a giant sigh, as if I’m deflating his favorite beach toy, a stuffed whale that he’s been keeping since he was a kid.

The sigh is a preface to his quiet answers that begin with “Well, I think …” or “Maybe …” as if he cannot answer a question because he sees 10 sides to everything, so his opinion has been turned into buckshot, leaving the recipient injured, confused.

He asked us what we were going to do for dinner. We walked to a nearby produce stand. He buys the produce. Then, we go into a grocery store. I purchase ingredients to make an alfredo sauce. We return to his apartment, Raegan and I make dinner–whole grain pasta with alfredo sauce and salad. We eat. Jonny offers us wine, which we accept.

After dinner, we sit on the couch, Raegan on my left, myself in the middle, Jonny on the right, and watch “True Grit”, on the living room wall, as Jonny has a projector attached to his laptop. That was cool.

Wednesday, August 24
Today, we took a subway to a concentration camp site, with a holocaust memorial. We rode the subway for free there and back. No one asked for our tickets. We did not buy any tickets.

As we were leaving, Raegan said, “I love you.” I told her that “that’s nice to hear because I love you, too”. On our way back to the train, we stopped at a Vietnamese restaurant, ordered a delicious meal, then walked back to the train.

Now, we’re at Jonny’s. He’s at a meeting. When he returns, we plan to watch a movie and maybe cook some food.

Thursday, August 25
We’re couchsurfing with Yashkin, a 27 year old Berlin resident who was born in Guatemala. He took us on a bicycle tour that was 8 hours long, included a big part of the city, including the Berlin Wall. He took us to an indian restaurant and paid for it. He lives in a 3rd floor walk up, wood floors, one big room, and a kitchen that connects to a bathroom. No kitchen sink, so dishes are washed in the bathroom sink. Yashkin, our super cool CouchSurfing host who gave us a bicycle tour of Berlin, and Raegan.

Friday, August 26
Raegan’s sleeping in, she said she felt sick, her stomach hurt. Once she gets up, we’re going to a nearby coffeehouse with internet, to get online to plan the trip to the next WWOOF location, about an hour-and-a-half away. We’re planning to leave sometime tomorrow. We’ll probably take a train as far north as we can, then hitchhike from there.

Saturday – Train to Sternhagen, Germany
We woke to say goodbye to Yashkin, our kind and terrific host, who was preparing to leave for work at the coffeehouse. We thanked him, said goodbye. After he left, we returned to bed. We both slept. Normally, I am not tired once I awake, but I slept well.

We pack our gear, clean the room, fold the sheets, clean the kitchen, leave a thank you note for Yashkin, and leave the key under the doormat. Raegan writes that the key is under the mat on the thank you note. We walk to the subway train, and “blackride” (ride for free, no tickets) all the way to Bernau, the last stop on the S2.

Blackriding is a bit risky, since our trip involves switching trains and staying on the last one for about 40 minutes, while it makes a high number of stops, 5 or 6, near the end, making stops every one minute. I watch for train cops.

At Bernau, we get out, and Raegan asks the bus clerk about the bus schedule. I ask where to buy tickets from another clerk at a store across from the bus clerk. We buy a train ticket for $20 euros, then ask where we need to stand. A nice girl tells us where to go. We go there, wait for the train. While waiting, Raegan has to pee. I look at this small abandoned building about 50 yards from where we’re standing, wave her over, and suggest she pees there. She does. The train arrives. We cannot find a seat, so walk forward on the train, and upstairs, and see a lot of empty seats.

We sit there for about 40 minutes until the train station lady asks for our tickets, then says something to the effect of this is first class. She asks for my name and I tell her we’ll move. We move to second class, downstairs, with fold out seats, stash our gear under the seats, and face each other, hug, kiss, talk.

Across from us sit two guys speaking in German, one has a bottle of red wine. Their wives and children walk in. Their bicycles and backpacks are nearby. Apparently, they are going on a bicycling tour and camping. They leave at a station before ours.

We arrive at Prenzlau, get out. I ask two people if I can use their phone to call and they say no. I tried using the T-mobile phone booth but the directions were in German, so I was unsuccessful.

I go across the street to a grocery store, ask a clerk if I can make a call.

She says wait, then makes a call.

Another store worker, a woman who is stocking the shelves, walks toward us.

I explain the dilemma that I need to call someone and don’t know how to work the phone, then ask her if she can make a call for me. She does. I talk to Julianne, tell her we’re at the train station. She says she’ll come. I thank the store clerk, return to the train station, tell Raegan, she says “great” and we wait for Julianne. 20 minutes later, Julianne arrives in an old red Volvo station wagon. We get in, then go to her place.